I *love* The Olympics. I remember being glued to the television when I was a kid and loving the grace of the figure skaters and gymnasts, the speed of the track stars.  I wanted to glide like the swimmers, spin like the divers, but I have to admit I never really wanted the nose clips of the synchros.  I just loved the concentrated festival of sport. Oh and of course the backstory that NBC was always so good at showing – chronicalling the hours of training, the dedication, the time away from families – the effort that transformed people into heroes.

I guess it is no surprise that when the Olympics came to Atlanta in 1996 and I had a little disposable income that I bought a brick at the Olympic Park. 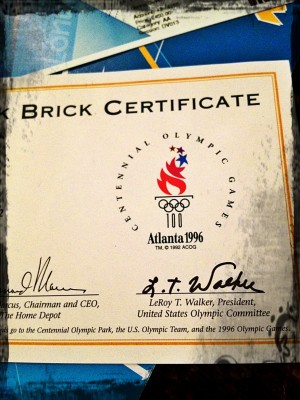 Yep. I own a brick. Somewhere. I’ve never seen it. But I have this certificate!

In 2005 on the 6th of July I sat at my desk, glued to the television screens in my office.  I work for a French company.  It was rather tense.  London and Paris were vying to host the Olympic Games in 2012.  Who would win the vote to host?  We held our breath, the winner was announced, and our office was split with cheers and solemn faces.  Hands were shaken. And time moved on.

Now it is only 7 days until the Olympics start in London.  My city.  I feel like that kid again.  Ready to be inspired by the dedication and determination of the world’s best athletes – today’s sporting heroes.  And better yet – I can’t wait to be a part of it!

We have tickets to events – diving, women’s marathon swimming, and the men’s football finals. I’ll be volunteering at the men’s and women’s triathlon races, as well as the road cycling races (yes – I have an Olympics Gamesmaker Uniform and those limited addition Adidas trainers and Swatch watch!).  I get to go to a dress rehearsal for the opening ceremony.  I have tickets to the Puma games experience event in my neighbourhood – they sponsor the Jamaican Olympic team and are putting together a really cool showcase for the duration of the Olympics including Groove Armada on the opening night. And my triathlon coach has secured the “Triathlon Live” venue for us for a few hours, at the Hyde Park triathlon expo site.

Yes the transportation in London will probably be a nightmare.  Yes I will be doing most of my travelling on my bicycle – let’s hope it doesn’t get stolen.  My trash is being collected by the bin men at 5am rather than after 7am so my sleep will be disturbed.  Some of my volunteering shifts start at 5am with check-in an hour before shift, so I expect to be sleep deprived. The Royal Mail put a letter through our mailbox telling us to expect delayed delivery of mail during the games. And the roads around my house will be operating with restricted hours. For all this I could grumble. But why grumble?

7 days until the the kickoff of the London 2012 Olympics… The world’s biggest global event.  Right on my doorstep!  I can’t wait!

(let’s hope I’m inspired by the athletes and their work ethos – – fitting my triathlon training into the madness is going to be a challenge!)