Well the Thames Swim was cancelled – I suspect that because of the recent heavy rains the run off created a bacteria laden environment not fit for an open water swimming event (can we say sewage run off??) so that left all my eggs in the Run Dem Crew basket.  Not a bad situation to be in if you ask me!

Run Dem Crew is a remarkable group of people in London who run. No egos. No hang ups. Just running.  I had the pleasure to join the West group a few months ago and loved it.  But then managing my foot tendonitis got in the way, so I haven’t been back – until Saturday that is.

I have to say that as someone with CMT, someone who has always felt slow and like an outsider when it comes to running, I had always avoided group running. I last had fun running with people when I was 9, then studiously avoided all things running for 30 years as I felt so inadequate.  Slowly I have made peace with myself, realising that for me, running has to be a me versus me game.  I just can’t compare my own performance to that of others or else I feel like an absolute failure.  But I had not wanted to put myself in an environment like group running – where comparison is inevitable – until I met Run Dem Crew.

With the encouragement of my fab friend Elelta and Orsi from bootcamp I joined a Run Dem Crew West session (where they encourage beginners to join the crew) and I found myself laughing and feeling like that 9 year old who last ran free with abandon.  It was – for lack of a better work – UPLIFTING.  The leader Corey and Ellie made sure I was never left behind, and they let me call my own shots to manage my health and well being.  It was fantastic.

I have felt like I was missing out – not training on Mondays with everyone.  But now that I am getting my foot tendonitis under control and feeling stronger from using the anti-gravity treadmill I felt ready to join in again this weekend.

It was amazing.  I joined up with a fab team of fab women – each with their own inspiring story.  Everyone was so welcoming, so determined to have a good time while getting their run on. 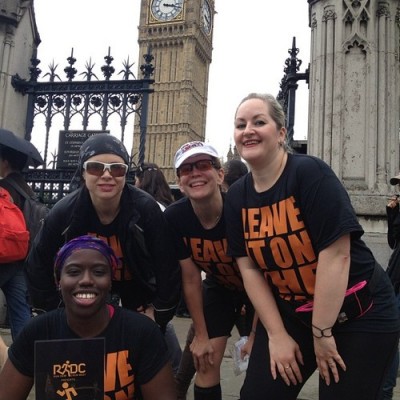 Candie, Kate, Me and Genna – Team Faster Than Your Average Sofa

With their encouragement I managed to clock 10k of running and probably a good 2 more miles of walking on Saturday.  This is the first time I have run 10k since January.  A HUGE accomplishment for me – mentally, because it was so much fun; and physically, because I had very little pain afterwards.  I finished up with fatigue in my muscles, not pain in my joints.  And with a great experience in the books.

I proved to myself that:
a) I *am* faster than the average sofa
b) With the right group of people I can feel as awesome as the caboose as I’m sure the fastest runner feels
c) That I am ready to run again
d) That Run Dem Crew medals *are* made of gold 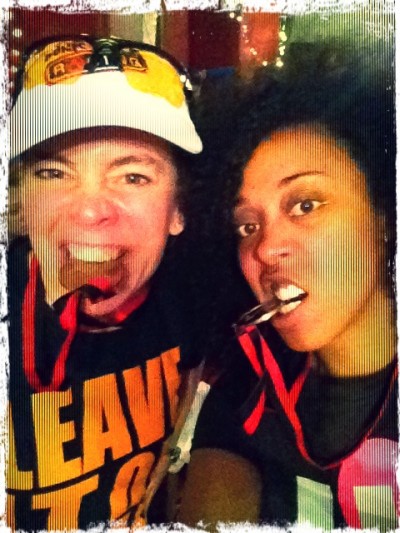