In Monday’s post I discussed some of the things I had done during my recovery from fractured ribs.  In addition to more time on my bike training and experimenting with the anti-gravity treadmill, I also had time to take a step back and think about me and running.

As long-time readers of this blog and it’s precursor “My Fitness Year” know, in 2009 I decided to challenge myself to get fitter and healthier, to get stronger to put off the (almost inevitable) physical decline that I expect to experience from my nerve disorder, Charcot Marie Tooth Type 1A.  To give myself a goal, something to direct this “get healthy” motivation toward, I decided to take triathlon more seriously and signed up to do an Olympic distance triathlon.  I knew that to do an Olympic distance triathlon I would also need to learn to run again – something I had not done since 1984.

I had a lot of troubles that year.  To give you a flavour… My hypermobility reared its ugly head and I partially dislocated both knees while doing run-walk intervals at my local field. Um, yeh, that was not a great moment.  And although probably none of the other moments were as low as that one, I learned through experience that learning to run again was going to be HARD.

I scaled back my ambitions and instead did two sprint distance triathlons in 2009, hired Terence Collins to coach me in triathlon in August of that year, and started a concerted effort to learn to run again with the support of a trained fitness professional.  We went back to the basics to build fundamental strength, and finally on the 20th of February 2010 I did my first continuous mile in probably 25 years.

I worked on my running.  Diligently.  But something just didn’t seem right.  My right foot just ached.  So finally by the end of my 2010 triathlon season I decided it was time to revisit my orthotics solution at the National Hospital for Neurology.  I visited the gait laboratory. I had orthotics recrafted. And I continued along my journey to learn to run.

The pile of orthotics that I have accummulated since late 2010…

In 2011 I was frustrated and felt like I wasn’t making progress with running, so on the advice of pro-triathlete Tamsin Lewis I decided to seek specialist running rehabilitation coaching from James Dunne at Kinetic Revolution.  We began to address my biomechanics and gait, worked on engaging my glute and hamstring muscles.  And I began to show improvement.  Running stopped feeling like a chore and started to feel like a pleasure.  Full of confidence and optimism at the end of the triathlon season, I entered a half marathon – the Egmond aan Zee half marathon (that wasn’t to be for me) in January.

My body couldn’t cope.  My tendonitis returned, viciously, and I went over the edge.  I went from managing through tendonitis to suffering overuse.

After consulting with Gita Ramdharry, my neurophysiotherapist at the National Hospital for Neurology, I decided to (smartly) train through the tendonitis.  I’ve have regular sports massage and needling to manage the tension and inflammation.  And even though training hasn’t felt great and my ambition to up my running volume has (not yet) materialised, I have continued to make steady improvements this year, including my first ever sub-40 minute 5k in a race.  But… things STILL do not feel right.

When I couldn’t run while I was recovering from fracturing my ribs, I thought a lot about running, and the fact that I was feeling much better WITHOUT running and WITHOUT the consistent persistent pain from tendonitis.  The time off allowed me to do a sanity check.

Is this all really worth it?

I know a few things.

First, I know that running has undoubtedly made me stronger.  I’m no longer in that place where climbing up the stairs in my house makes me feel weak and exhausted.  Today I can complete an Olympic distance triathlon, which includes a 6.2 mile run.

Second, I know that I still believe.  I believe that if I could find a solution to stabilise my right foot, I could finally stop stressing my peroneal tendon, and I BELIEVE that this I would enable me to run for longer and to run faster.

Third, I know that I still have dreams.  Dreams to complete a half marathon.  Dreams to see how far I can go.  I am not ready to dream new dreams – yet.

So today I went to another appointment with another orthotics specialist. I saw Mick Habgood at Balance Physiotherapy who was recommended to me by Gita.  Mick knows sport AND he trained in Australia with one of the foremost experts in my nerve disease, so is familiar with the challenge that neuromuscular disease poses for activities like running.  We started from the beginning, assessing my footfall, looking at what is happening and putting it into the context of the pain that I am feeling.  We agreed to try a new approach – to tape up my foot for my training and to see if the control offered by the taping starts to address the issues I am facing.  The taping will enable us to experiment with a few solutions before deciding on a path of action.  So foot covered in tape I started round three today – round three in my search for a solution… 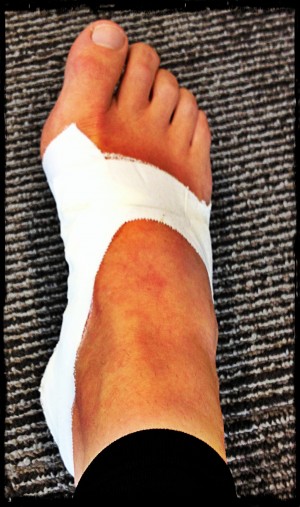 I have to confess – I am frustrated and tired of managing through pain.  Directly at odds with this is the healthy feeling I get from doing triathlon.  The feeling of health and strength far outweighs my frustration (for now).

Another confession – I am an optimist.

Let’s hope this round – round three – is the beginning of my rainbow.  And let’s hope that at the end of my rainbow will be something to help me to address my foot issues.

Here’s to hoping.  And to more orthotics to add to that pile pictured above.  Oh the things that have been in my shoes!