I am a born American – and I also carry British citizenship.  My heart lies in two countries.  Although if I had to choose one nationality, I know what it would be…

Wednesday was Independence Day in the US.  Ironic that I carry both citizenships isn’t it?  Well nowadays we all believe in the “special relationship”, right? 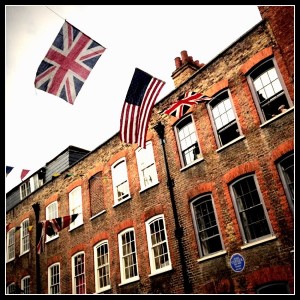 I mean, we even had the Stars & Stripes flying on my street during the Queen’s Diamond Jubilee celebrations.  Now if that isn’t a sign of “BFFs” when it comes to two countries, I don’t know what is…

Being able to be a dual-national brings with it a whole host of advantages – probably foremost in my mind at the moment is that I get to cheer for both the home team as well as my home team at the London 2012 Olympics.

I am really looking forward to the Games, and will be volunteering at both the triathlon and road cycling events, as well as enjoying lots of things going on in London.  I’ll be attending a few events, heading down to the Triathlon Live demo zone in Hyde Park for some coaching with my club, hitting up the technical dress rehearsal for the opening ceremony before the Games, going to the Puma experience events in honour of the games…  All in all I plan to just soak up the experience.  The world’s biggest show is coming to London.  I. Can’t. Wait.

I am pretty lucky because I have actually met and chatted with a few of the athletes who will be representing their countries at London 2012.  I think that is THE unique thing about triathlon – one which I love.  Elites and normal athletes have the chance to interact, and sometimes are on the same course at the same time.

In 2011 I volunteered at the Hyde Park Triathlon that was the London 2012 test event, and while I was there had a chance to meet two of the US women’s team members. 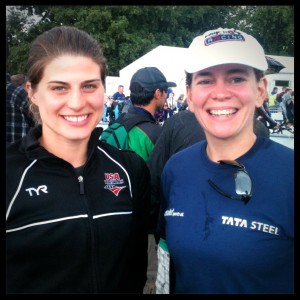 I literally ran into Sarah Groff in the crowd just before the men’s elite race in 2011. 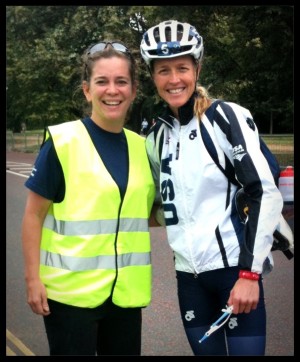 I said hello to Laura Bennett when the 2011 elite women’s race had finished – she had a frustrating race that day, but still took time to stop and smile with me.

And in May as I scoured the Austin airport looking for some Advil for my “sore chest” after the USA Paratriathlon national race I quite literally ran into Hunter Kemper who had just won the the CapTex triathlon.  I asked if he would be okay with a photo, and he graciously said yes.  He probably cringed when I said to the woman who kindly offered to take it “Do you know who this is?  This is Hunter Kemper!  He is a legend!  He is going to his fourth Olympics this year!”  I admit it – I am a total fan girl! 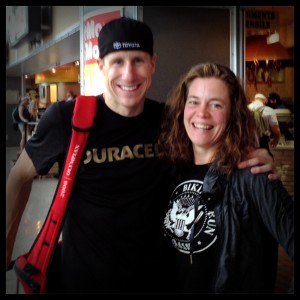 I love that Hunter Kemper is sponsored by Duracell – he literally keeps on going!

Having met some of the athletes in the events I will be volunteering for makes the experience all the more special for me.  As volunteers we have to stay completely neutral on the field of play, and focused on our jobs, not watching the race.  But in my heart I will be pulling for both my home teams!