There is something about summer – the weather warms up and the warmer evenings bring with them any excuse for a BBQ.  We finished works on our house in late 2011 – which included a new outdoor bar-be-cue space.  By April we made sure that things out back were tidied up, all the remaining building materials were stored away in the shed and we have slowly been reclaiming our back yard space (that we never knew we had).

I am a huge fan of the year round bar-be-cue, and in the colder months tend to use the grill to cook meaty dishes.  But summertime screams for lighter BBQ meals.  I love whole grilled mackerel.  And about three years ago I spent almost every weekend trying to perfect spatchcocked BBQ chicken.  So when Mara of What’s For Dinner posted her cedar planked grilled salmon, I knew I had to try it.

I had never seen cedar planks for the BBQ before but trusted that I could find some on Amazon.  I got to work figuring out a way to source a delicious high quality wild salmon (thanks Marky Market for heading to Billingsgate Market for me with this request).  And I devised both a glaze as well as a side dish to make the main course complete.

A high quality side of salmon

60ml freshly squeezed orange juice
4 tablespoons honey (I was lucky enough to use raw honey from my friend Victoria – it has a lovely flavour, I think a little like cloves)
3 tablespoons balsamic vinegar
2 tablespoons soy sauce (we use gluten free tamari soy, same flavour but friendly for the gluten intolerant folks)
two crushed whole cloves of garlic
half of a small seeded green chili pepper, sliced finely

Combine all marinade ingredients in a sauce pan and heat to combine.  Then pour over your salmon in a container, and cover for about an hour before grilling.  Note that I did not include any olive oil in the marinade, as I think that salmon has a natural oiliness and was hoping it would not need extra.  I was right – this marinade worked perfectly without any extra oil.

Heat the BBQ to an even 140C.  Place the salmon on the plank and directly onto the grates.  Cook gently, being very mindful of the temperature (do NOT let it raise above 140C) for approximately 25 minutes.

The plank can be placed directly onto your table – but it will be hot.  Serve and enjoy.

On a side note:  I was a bit worried about how this would turn out, as it seems a lot of people have had mixed results with grilling on a plank.  For me it was perfect – I think that was down to two key reasons.  First, I soaked the plank overnight to ensure that it would not burn (one edge did char but the rest of the plank is entirely intact and I think I can safely reuse my plank another one or two times).  The next key was keeping an eye on the BBQ temperature.  I vigilantly never let the temperature raise above 140C.  The heat was perfect. 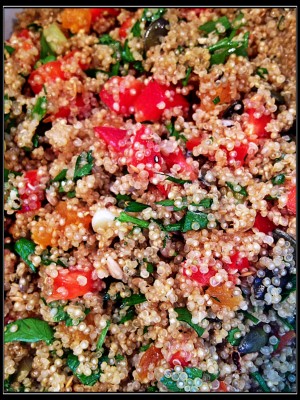 Prepare the quinoa.  I used 1 cup of quinoa and approximately a cup and a half of water.  I simmered this on low heat, and when the water was close to evaporating (before the quinoa became fluffy and light) I would just add another 1/4 at a time. I repeated this until the quinoa was soft, fluffy and “cooked”.  I think the process took about 15 minutes.

To the cooked quinoa add half of a thinly sliced red pepper, diced dried apricot, a big bunch of chopped parsley, about 1/4 cup mixed seeds.  Then dress with the vinaigrette.

As the salmon was cooked with orange juice I wanted to carry over the citrus theme to the quinoa salad.  I used lemon as I thought it would contrast nicely with the sweetness of the red bell peppers and apricots.  Vinaigrette is so easy to make.  The trick is really to shake the ingredients together well, to ensure that they are emulsified (the oil and vinegar evenly dispersed).  I add the salt and pepper to the vinaigrette mix.

Side note: This was the perfect accompaniment to the salmon.  If you want you could also add spring onions and thinly sliced green chili peppers to taste – I think that would work well too.