This weekend was fantastically uplifting for me for a number of reasons, but probably top of the list was wandering down the street to see Town of Runners, the documentary film about the town of Bekoji in Ethiopia.  I will do a separate post on the film, what it said to me, and WHY YOU NEED TO SEE IT.  But let’s just say it was nothing short of INSPIRING for so many reasons, including the people at the screening.  As I sat waiting for the film to start I chatted with Ify. We sat next to each other, and as you do at a running related thing, one thing leads to another and you start talking about running.

I sheepishly confessed in our conversation that I don’t view myself as a runner, but more as someone trying to develop a love of running.  A little bit further into our chat, Ify asked me “Well why do you do it?”

Keep Moving to Keep On Moving.

One of the motivations when I started to take triathlon a bit more seriously in 2009 was to see just how strong I could get.  To get moving to keep on moving.  So that someday if my CMT were to lead to a physical decline, I would decline from a position of STRENGTH.

Another part of the weekend that inspired me was the marathon – Sunday was the London Marathon.  Normally I head down to mile 23 (across the way from mile 13) and cheer. But yesterday, I had to play smart.  My foot is acting up, so I knew that I would train, and then head home to do some stuff around the house, rest and take it easy.  I didn’t want to be on my feet all day – I couldn’t.  I have four solid weeks of training left before paratriathlon nationals, and I need to do everything I can to keep my foot under control.

To keep moving, to keep on moving.

So instead of cheering, I turned the marathon coverage on when I got home from training, watching the BBC instead.  Absolutely incredible.  Story after story of people who were out there running for so many reasons – their own battles, their own causes, their own attempts to better themselves.  Each story and person running gave me a little more motivation to push that much harder for the next month.  To do the best that I can do to ensure that I am in the best place possible when race day arrives.

It hasn’t been easy.

Let’s go back to “the foot thing”.  As many long-term readers of this site (and its previous incarnation) will know, foot problems are one of the key things I face when I run. I wrote about this in 2010, and about training through pain.  To summarise, my nerve disease has led to many biomechanical issues, but the foremost is atrophy of the peroneal muscle.

The peroneal muscle is on the outside (lateral part) of the leg, and works to stabilise the ankle and help with the “push” phase of running.  For people who have peroneal atrophy, not being able to flex the foot upwards (dorsiflexion) becomes common, leading to what neurologists call “drop foot” or kind of walking with the toe pointing downward and “slapping” the ground.  I have some peroneal atrophy, but not total, so rather than foot drop the way that my atrophy manifests in me is through weak ankles. Another way peroneal atrophy shows up in me is through peroneal tendonitis.  As my muscles aren’t sharing the burden when I work hard (they can’t, they’ve atrophied), the strain and support starts to become the job of my tendons.  My tendons see a lot of action – my ankles roll outward (supinate) so the tendons work hard stabilise my ankle and foot, constantly being pulled.  I’ve been working on my running gait, and by doing so have increased my cadence and am pushing more.  Again, my peroneal tendon picks up the slack.  And with the the tendon working rather than the muscle, my foot has started to get tight and hurt.  Particularly at the points where the peroneal tendons insert – all the pulling from my tendons taking strain because my muscles aren’t doing their job has my foot sore, inflamed, and needing some TLC and management.

I have spoken with my doctors and physiotherapists, and the way they view it, I can either take time off or train through – and if I choose to train through then really only I know the time when the soreness will become true overuse (overuse being what will cause me the most damage).  In November I hit that wall, after doing 15km runs and getting my weekly run volumes up above 20km per week (which may not seem like much to you, but this was HUGE for me!)  I know I had overuse because the sides of my ankle WERE ON FIRE.  So I took a few months off running and went back to the drawing board and, amongst other things, I visited my orthotics team. 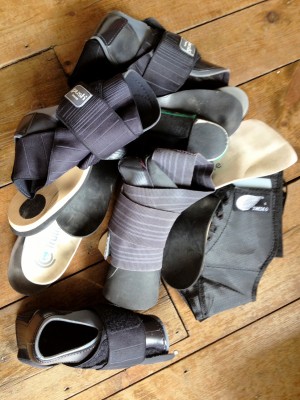 Since 2003 I have been in search of an orthotics solution to help stabilise my feet, in order to keep the strain on my peroneal tendon in check.  The pile of stuff?  That is only the most recent collection of inserts and braces.  I have cycled through countless casts and tried multiple varieties of insoles.  In 2010 I visited the orthotics laboratory to undertake weight based gait analysis, which resulted in a new more aggressive approach to ankle stabilisation.  Late last year I revisited the hospital clinic and picked up some new splints and new orthotics to help stabilise my ankles during run specific training.  And at the end of March I went back to the high tech gait lab to see how things were going.  I’m still in search of the right solution to race in – a solution that provides enough stability while being able to be put on quickly.

And while I search, I baby.  I am taking care of my foot.

This morning I went to visit to Michael, the miracle worker and sports massage therapist who (quite literally) has kept me moving since 2007.  As he dug into the oh so painful and tender insertion points of my tendons, frictioning them and increasing blood supply to the area, moving things around and loosening things up, I threw a towel over my face to hide the tears and thought to myself.

As I walked out, with pain replaced by free movement and relief, the answer seemed obvious.  I felt strong in my legs.  Stable.  Something that only 3 years ago I felt was slipping away.  It is obvious, right?

Keep Moving To Keep On Moving

“Dreams depend on hard work and good luck.” ~Town of Runners

One response to “If It Hurts, Why Do It?”