This week at our house we have embarked on a two week gluten free experiment.

For a few years I have listened to DH say how he thinks that eating pasta and bread may be causing him stomach issues.  I have always contended that this is probably down to portion control – when he eats a bowl of yummy pasta he does not stop at just one bowl – he can easily devour a few servings, which is A LOT of pasta by anyone’s standards!  For years we have talked about maybe just trying to cut back on the pasta we eat, finding alternatives to toast at breakfast.  But he’s still grabbing sandwiches at lunch – because they are convenient and easy – and he is still getting a sick stomach feeling.  Which he has always said he thinks is because of wheat.

When I was in Japan on business a few weeks ago I was chatting online to a friend of mine from university, Valerie.  I love that we have reconnected on Facebook, and have enjoyed seeing her post about her cooking and training (she is a super speedy triathlete and an amazing vegan cook).  And… she is completely gluten free.  I mentioned that we were thinking of doing a food sensitivity test to see if DH could isolate that wheat (gluten) was the source of his issues, but that I wasn’t sure which plan to follow.  Would it be Maffetone inspired by my friend Kelly’s experiment?  Or would it be the FODMAP diet as suggested by my friend Erica?  I had my hesitation with all of these plans though – they were extreme for how we eat, eliminating fruits and grains, and would require a lot of planning and preparation so extreme for our lifestyle.  Valerie asked me a super simple question – why overcomplicate things? She suggested just cutting out the gluten, for 4 weeks, and seeing how DH felt.  Just keep it simple!  We talked some more, and when I got home from Japan DH and I decided that what would work best was 2 weeks of elimination.  Just focused on sources of gluten.  To see how he would react.  And to keep him company (misery does love company, after all) I would do it too.

Why reduce wheat (and gluten)

I am not a nutritionist. But I don’t think it takes a nutritionist to know that wheat products – things like bread and pasta – they don’t really offer much when it comes to nutrition.

I have always kind of looked at bread and pasta as fillers, you know, kind of like delivery mechanisms for the stuff I really find yummy – pasta sauce and sandwich fillings and pizza toppings.  OK – I admit – there are exceptions.  Like an artisan sourdough bread with a layer of delicious high quality butter.  Or a fantastic homemade pasta, served simply with cracked pepper and parmesan.  But in general, I am all about the other stuff, not the wheat.

When you think about it, it is not surprising that wheat doesn’t offer much in terms of nutrition.  Wheat production is a massive industry, and before we even get our hands on flour (unless we mill our own like my friend Paukku does) or ready made breads and pastas, wheat flour has been through a lot of processing. 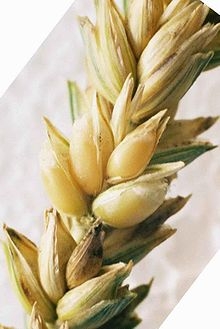 Wheat plants have been designed to yield a lot of grain.  The grain is then harvested and sent off to factories, where the hull and the bran are generally removed (along with most of the nutritional value) and the end result – the interior – is turned into flour which is mostly starch with gluten.  This is then enriched and sold on for our home use or for industrial food processing (bread production, cookies, you name it).  Frankly, if you want nutrition, bearing in mind this process, it seems kind of obvious that fruits and vegetables can offer more (am I alone in thinking this?). 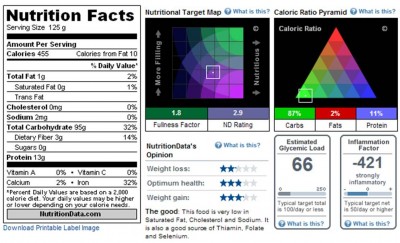 One of the things that jumps out at me is the extremely high inflammation factor associated with wheat.  Granted, this is for a full cup (125g) of wheat. But it is HIGH!
I jumped on google to learn more about wheat, and found the following in article after article:

* Wheat contains amylopectin A, a factor that is easily converted into blood sugar. When you eat wheat, it can convert into sugar, causing blood sugar spikes, and a cycle of high energy and then crashes.  So a consequence of wheat eating is that it can leave you feeling hungry again not long after you have eaten it (due to this sugar conversion property).
* Gluten protein can cause an inflammatory reaction in the body.  At its worst this can lead to celiac disease, where the protein damages the lining of the intestines.  But even for non-celiacs, the body can produce antibodies in response to gluten.  This leads to general systemic inflammation, asthma like symptoms, and skin problems.
* Gliadin protein can cause an appetite stimulative effect and has been likened to an opiate (yes I know I have said before it is not the cupcakes fault – and I still think it is not if you pay attention to what you eat and what it contains, and know how it impacts you)
* A sensitivity to wheat can cause problems with nutrient absorption – studies have documented that levels of Vitamin D, calcium, magnesium can all be impacted. And shockingly 29% of people have been shown to have some sort of senstivity
* A lot of athletes (like Tim O’Donnell – thanks to my friend Elizabeth for pointing this article out to me) remove gluten from their diets to reduce food-related inflammation in their systems.  Athletes report a quicker recovery time from exercise, less fatigue, and less muscle and joint soreness once they have gone gluten free.

Probably the hardest part for DH is just feeling hungry.  The convenience of grabbing a sandwich is out the window, requiring more thought on how to eat to not feel hungry.  So far this week I’ve managed to help him eat a good quality breakfast twice – but that has left him three days to think about how to best eat through the morning until lunchtime.  It can be a hard process, going cold turkey, not planning well, and then feeling hungry!

DH has also notice that he is sweating more with exercise. As I had an appointment yesterday with my nutritionist Vicki Edgson I took the opportunity to ask her if going off gluten may be leading to more sweating.  Vicki remarked it is likely that his body is just going through a natural process releasing any fluid it has been retaining, perhaps that may be related to the sweating.  Maybe this is like a “wheat” detoxification? People often sweat when they detox, right? (Side note: I am already a “sweater” so haven’t noticed this aspect of going gluten free.)

I have noticed that DH seems a lot less bloated, and that he appears to be slimming down in the stomach area.  People say this is one of the first noticeable things that happens when gluten is eliminated from a diet.

For me, this week has been both easy and hard.  On the easy side, it has been kind of a reversion to how I used to eat when I was growing up in Hawaii.  I’ve made rice balls (musubi) at home for breakfast (filled with tuna, wrapped in seaweed).  I love eating like this.  But on the hard side, because I have not really felt any negative impacts from eating bread of pasta, I find that my natural choices – especially at lunchtime – seem much more restrictive now.  For example, I love leaving the gym at Wednesday lunchtimes and grabbing a double stuffed sandwich (like I said – it is all about heaps of fillings for me!) – but this Wednesday since bread was not a part of my week, I couldn’t do that. I felt like I was missing a part of my normal routines.

I seem to be a bit less bloated, thinner around the middle (our scale ran out of batteries ages ago and I still have not got around to replacing it yet, so no measured analysis here).  But I’m not doing this experiment to lose weight.  I talked about it with Vicki, and we both agreed that as a long term plan, if we do eat gluten free at home, I need to watch the scale as I should avoid weight loss as it may compromise my sense of general well-being and (newly returned) energy levels.

And on the fun side, I’ve been experimenting with new things – like baking gluten free.  Last weekend I made a cake for Mothering Sunday and used ground almonds, cashews, and rice flour.  It was so tasty!  DH said it was possibly the best cake ever.  And this weekend I am going to try out the What Iif Flour substitute – I can’t wait to see how that works! 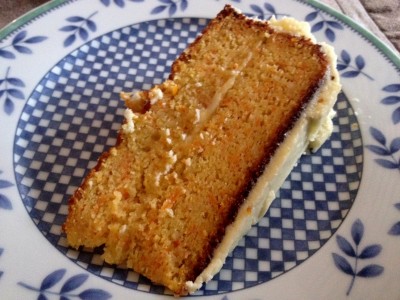 1. Preheat oven to 180C/350F
2. Using a spring form tin, place baking parchment over the base (this enables easier release of the cake). Oil the tin if it is not non-stick.
3. Beat eggs and sugar together for 10 minutes – I used an electric mixer. The colour turns almost white.
4. Add carrot, courgette, and orange and beat together again until well mixed.
5. Add flour, almond flour, baking powder, salt, and elderflower and mix together well (no flour pockets, just a cake batter).
6. Pour into tin and bake for one hour.
7. Remove from oven and cool on rack.
8. Make the icing – using an electric mixer, beat the butter until smooth and fluffy. Add the icing sugar and beat. Add sugar gradually until the buttercream is fully incorporated. Then add elderflower and beat together. You get a delicious elderflower buttercream.
9. Removed cooled cake from springform tin.
10. You don’t have to, but you can slice the cake in half at this stage to have two layers. If you do this, gently ice the top of the bottom layer, and then place top layer on top.
11. Fully ice the cake and sides.
12. Serve and enjoy!

Note: the recipe is also posted on 52 Weeks of Baking – the collaborative baking blog that I am involved with. Head on over and check it out!

4 responses to “The Gluten Free Experiment, and Cake”