One of the things I struggle with is fatigue.

I’m never certain if my fatigue is from being active, from being a “type A” do it all person – or if it is a manifestation of my nerve disease.  It is said that people with nerve problems often get fatigued easily.

I can feel fatigue sneaking up, rearing its ugly head.  I go through the day tired. It lingers, in the back of my thoughts, making each move just a little harder, as if I was trudging through mud.  I try to grab early nights, and to sleep in a bit.  But sometimes, it is not enough.  Sometimes I just COMPLETELY run out of steam.  A full scale collapse, where all I can manage is staring at a white wall (even turning on the tv and watching it can take too much energy!).  I liken it to running out of charge, like a flat battery.

When I first started exercising more, as a way of feeling better, I would get this dead battery feeling A LOT.  I would spend most of my weekend afternoons crashed out on the sofa – well, Saturdays at least.  On Sundays I tried to avoid sofa time as a full scale collapse mid-day also messes with my sleep at night.  The “out of battery” situations would mostly appear after a long bike ride, and definitely after a run.

Over time, the fatigue has shifted.  I can now run 5k at a stretch without a collapse.  My body has adjusted, somewhat.  Nowadays, I get more fatigued with short burst intense exercise.

This has made my training coming into the spring interesting, to say the least.  Knowing I needed to work on strength, in January I added in two “bootcamp” training sessions.  I start my Tuesday and Thursday mornings with SITC Bootcamp.  The sessions are 30 minutes, and all about intensity.  Circuit based training, using both my own body weight as well as weights, doing things like crab crawling, lunging, pushing and pulling, tricep dips, you name it.  As quick as possible about three times over.  They are fantastic sessions, and have radically improved my general strength levels.  But they can really WIPE ME OUT.

In February I asked one of the neurology researchers at the Institute for Neurology in London why this was.  I asked her a little bit about neurological fatigue, how it differs from muscular fatigue.  Turns out not much is known about neural fatigue – but fatigue is a common complaint of people with neurological conditions.  Fatigue and its management have been identified as critical research areas.

We talked about a simple lay persons way to explain why I was getting fatigued.  Basically, with my nerves, the protein coating which facilitates the transmission of a nerve signal from the brain to the peripheral (e.g. leg and arm) muscles is messed up.  So the signals run very slowly, and perhaps the signals do not reach each and every point where nerve meets muscle, causing the nerves that do work to take over from those that don’t.  When you add high intensity exercise into the mix – requiring more and quicker nerve signals – it just tires the mind, and nerves, out.  The muscles that do get stimulated do more and try to compensate for the muscles that do not receive the signals.  Muscles get tired.  And suddenly, you are left with a flat battery.  Just plain tired out.

It’s pretty easy to feel alone when it comes to fatigue.  But in February I read this article in which Anthony Zahn, winner of a bronze medal in paracycling at the Beijing Olympics who has the same nerve condition as I do, described the impact of intensity on his training:

“I’ve been told that high intensity work can increase the degeneration.”

And his coach stated:

“From a training standpoint he isn’t able to do what he was doing three or four years ago. We need to find more creative ways to train.”

Finally someone discussing the same issues I contend with!

I always have to think of way to improve while managing the impacts of CMT on my body.  Be it tendonitis in my ankles which causes me to re-think my approach to running, or upper body strength work to improve my swimming – it is about creativity and experimentation to generate improvement.

When I first started doing triathlons I sought guidance from my doctors about exercise and any potential impact on my neurological health.  I had heard the orthodoxy about how exercise can lead to muscle loss in neurological patients.  My doctors – some of the top researchers in the field of CMT – told me that the studies showing that exercise can cause degrading of muscles in CMT patients were dated, and that such old orthodoxies were challenged and debunked.  Rather than reading the work of Paola Vinci, which caused so many doctors to lead their neurological patients away from exercise as a source of relief, they encouraged me to read the works of van Pomeren* published in the Journal of Rehabilitative Medicine in 2009.  In this study the researchers dispel the notion that we need to limit our activity to prevent muscle strength loss.

So I’m not quite sure I agree with Zahn’s comments on exercise causing degeneration, necessarily…

Degeneration and the impact of exercise on my body IS something that I monitor and that I keep an eye on, and something that I talk about with my doctors. For example, I knew that when I upped my run training in the autumn with the idea of doing a half marathon that my body may not react well to the loading – overtraining and overuse injuries are common in endurance athletes, and I suspected I might be particularly vulnerable due to my CMT.  Indeed, I entered a spiral of overuse in November – my peroneal ankle tendon had a constant burn as I was asking more of my weak muscles and did not have enough underlying strength to train to the level I needed to get through a half marathon.

My experience with upping my running, which highlighted my weakness, is what drove me to explore bootcamp to build strength.  But the intensity of bootcamp, and the fatigue I can feel afterwards, are causing me to pay closer attention to my fatigue levels and to my recovery too.

Here’s a snapshot of a typical fatigue questionnaire.  How do you answer the questions? 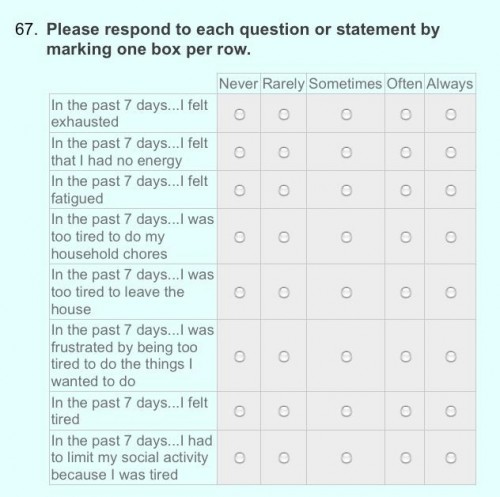 Would it surprise you to know that many people with CMT answer often or always to ALMOST ALL of the questions?  I am somehwere in the rarely and sometimes category for most of my answers…

I’m trying to learn more about and understand fatigue, specifically neurological fatigue.  If you come across anything on the subject, do let me know.

I’m also doing some experiments on varying how I train to manage fatigue.  I will post more about that, after another few weeks of trying out my “new” approach.

*Note: the van Pomeren work – “The Hypothesis of Overwork Weakness in Charcot-Marie-Tooth: A Critical Evaluation” by Madlendka van Pomeren MD, Ruud Selles, Berbke van Ginneken, et al was published in the Journal of Rehabilitative Medicine in 2009, issue 41 pages 32-34.  If you would like a copy drop me an email through the contact page form.