I have been ruminating about this post for a while.  Since August 2010 I’ve been meaning to write about charity fundraising. Why it matters to me. Why affiliating with a charity is special to me. What your choices do or don’t do for the charities or causes you support.

And then in December 2011 I kind of had the stuffing knocked out of me with a decision by an individual.  I decision I did not understand and a decision I felt had consequences on the organisation I have chosen to support with my own charity fundraising.

Me and the CMT Association

In 2010 I made a decision to shift my charity fundraising support to solely benefit the CMT Association.

Since I started charity fundraising in 2003, I had aligned my efforts with organisations supporting research and respite and programmes for breast cancer sufferers.  I did this to honour my mother, who died from breast cancer in 1999.

Not to diminish all these organisations and the people who support them, but there are just SO MANY PEOPLE who wear the pink.  There are literally millions of people who support breast cancer charities.  I found myself wondering if my efforts were really having the maximum impact possible.  And I questioned if I was really honouring my mother’s memory the right way.  You see, my mother was a huge believer in the power of an individual to make a difference.  She showed this to me from the time I was about 6 or 7.

I had to ask myself “was I making an individual difference lending my support to a huge recognisable cause?”

I did a total reassessment.  I thought long and hard about what charity would benefit from my support.  What charity supported my own values – an appreciation of the scientific (meaning: support for research), and appreciation for the individual (meaning: follow up and a demonstration of care to their donors), optimism for the future (meaning: a comprehensive strategy for how they would use the funds I could donate).  I thought about what charities mattered to me.  I thought about how I would fundraise.  And I decided.  I would support the Charcot-Marie-Tooth Association.  The charity which supports research into the cure for CMT, the nerve disease which impacts 1 in 2500 people, including me.  And I would do so by visibly displaying my support on my blog, by fundraising before key sporting events, and with awareness building efforts.

My choice on who to fundraise for and which charity to associate with was a deeply personal decision. I made this choice deliberately and through a selection exercise aligned with my values.

(Note: this may sound mechanical – but it is true. I strongly encourage anyone who does charity fundraising through sport or other events to go through a similar exercise to help you to ensure that your chosen charity matches your values and what is important to you)

What the CMTA does

You may not know it, but the CMTA:

* is the largest single focus organisation – 5 to 10 times larger than other smaller organisations seeking to focusing on CMT – that is dedicated to supporting all elements of Charcot-Marie-Tooth (awareness, information, resource networks, community, research, support).
* operates with a $3 million annual budget.
* includes amongst its advisors some of the leading CMT experts, including Dr Michael Shy and Dr Steven Scherer.
* has a partnership with Physiotherapy Associates in the United States to teach about CMT and provide specific information to their members on CMT
* provides active grants to more than 50 research endeavours in the CMT space, not only supporting research into the cure but also practical and cutting edge research, including stem cell applications in CMT research and treatment.
* is the only CMT-focused organistion actively financing research into the cure for CMT, with advances in high throughput drug screening for CMT1A treatment reaching the point of requiring a large identified group of CMT1A positive individuals for testing in the near future

The CMTA may be a relatively small charity, in comparison with the giants like the Muscular Dystrophy Association, but its ambition is huge.  Its leadership is commited, energetic and responsive to the needs of the broader CMT community.  I have never regretted my choice to affiliate myself with this charity, and I take comfort from the fact that all of those involved in my medical care know about and also support the work of the CMTA.

Although I have a clear association on my website with the CMTA, and I have sent out hundreds of #swim caps with information designed to build awareness of CMT, and I have emailed people asking for contributions to my fundraising campaign, until 2011 I had never considered being a part of a “team” to support CMT.  When I was asked if I would be interested in receiving a TeamCMT jersey. I accepted as the “team” jersey also had the logo of the CMTA.

I proudly wore the jersey during one of my events to show my support for the CMTA.  I always made it clear that I was proud to lend support to the team since the team jersey displayed the logo of the CMTA STAR programme – the same organisation I fundraise for and the same programme I have featured on my site.

Rather disappointingly, in December 2011 a unilateral decision was taken to shift the affiliation of “TeamCMT” to the Hereditary Neuropathy Foundation.  I was familiar with the HNF as in the mid-2000s I supported their efforts through donations and membership fees.  But when I reassessed which charity to align my fundraising with in 2009, I chose the CMTA.

To be perfectly open – when one individual made the decision to change TeamCMT’s affiliation away from the CMT, I took this decision personally.

The reaffiliation was explained to me as “not a big deal” and that “it doesn’t matter what the charity logo is, the aim is the build awareness of CMT”.

But for me, when you wear a charity’s logo, you ARE supporting that charity.  Jettisoning the CMTA logos meant that if I chose to wear a TeamCMT jersey, I would be visibly associating and supporting another organisation – even if I were to keep everything else the same – the same fundraising links on this site, the same regular communication and involvement in CMTA news that I have had in the past.

The manner of decision making also made me think deeply about what exactly I valued when I comes to leaders, organisations, and teams.  As you may remember, I studied leadership at the University of Maryland and the ideas of TRANSFORMATIONAL LEADERSHIP almost feel like a part of my DNA thanks to Georgia Sorenson.  I carry these ideals of leadership with me when it comes to what I seek in the teams I am a part of.  I believe that TEAM means member participation.  I think TEAM LEADERS should seek out member views – and consider these views when taking large decisions.  And if a TEAM LEADER has a vision which differs from that of the team, the TEAM LEADER needs to explain their vision and convey it such a way to ensure team buy-in and commitment.  A ZERO CONSULTATION MODEL OF LEADERSHIP does not sit well with me – and the wholesale realignment decision of one person which impacted a whole TEAM jarred with my LEADERSHIP DNA.

*she wrote and now steps off the soapbox*

I thought back to my mother. The one who taught me about charity at an early age.  My mother always tried to show me that if I didn’t like something, it was within my power to affect something positive out of the negative I felt.  So that is what I did.

Over the past two months I have been in touch with the CMTA, a logo designer, a clothing company, and others in the charity fundraising space.  I have been assembling information and ideas, and helping the CMTA to develop their own athlete offering.

And as a result of this work and gaining the buy in of the CMTA, the HNF-affiliated Team CMT is no longer the only show in town for athletes and those who wish to support CMT focused organisations.  Now there is the CMTAthlete program, which I am proud to write about in this post.

As a CMTAthlete my affiliation for fundraising remains with the CMTA.  My kit for my 2012 triathlon season will include logos in support of the CMTA.  And I can remain 100% committed to support for the only CMT-focused organisation that actively finances research into the cure for CMT, the neuromuscular disorder that impacts me and so many others.

What will the CMTAthlete programme offer?

For both athletes with CMT, and their supporters, a comprehensive CMTAthlete programme is being launched.  Some examples of the new offer include:

* Specific logos designed for use in printing (shirts, clothes, etc) – both the usual CMTA logos as well as those designed specifically for CMTAthlete use.
* Sites for fundraising – the CMTA already sets people up for fundraising with their own direct access pages on the CMTA site. Fundraising through the CMTA secure site ensures that the CMTA will receive the maximum amount of revenue from athlete and supporter efforts (unlike other sites such as Crowdrise which take a typical 5% of all transaction revenue for their own admin costs).
* CMTAthlete sports kit will be made available for purchase so that anyone can buy and visually support the CMTA with their athletic clothing choices.
* Athlete discussion forums have and will be launched.

And more will be done to make this an open, accessible community under the CMTA umbrella with all of the access, support, advice, information and enthusiasm that it has at its disposal.  For anyone, any sport, who chooses to ally their efforts with the CMTA. 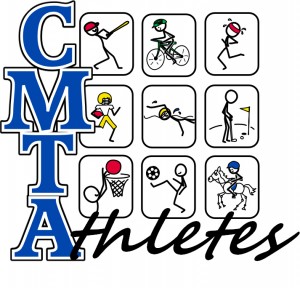 How to get involved

If you are interested in the CMTAthlete programme, please feel free to drop me an email, tweet, or Facebook message.  My email is .(JavaScript must be enabled to view this email address)  As they say (well I’m sure someone must say it somewhere?!), it’s a big house and there is room for all.  Or maybe I should say “The More The Merrier!”

(Note: A special thanks to Hannah Ensor of Stickman Communications for the creation of the fantastic CMTAthlete logos.)

Note 2: This post was updated with links to the CMTA on 19 February – as one of my friends pointed out to me, people should be able to click through straight from the post, and I shouldn’t assume that people visiting would just find the links on the side bars on the site.  Well spotted and thank you Tom!

2 responses to “I Am A CMTAthlete”