My journey to become a volunteer at the London 2012 Olympics I guess started when I filled in the application form.  I love watching the Olympics.  So when the Games were announced and London snuck by Paris to win the right to host in 2012, I knew that I would apply to volunteer.  With a triathlon specific code from both my triathlon club and as a result of volunteering at the ITU World Championship series race in 2010, I filled in my application form what seems like ages ago.  And now the Games are only 24 Sundays and 172 days away. Time flies.

I had my first interview to become one of the 200,000 Games Makers (staff, contractors or volunteers who put on the London 2012 Olympic and Paralympic Games) last winter. 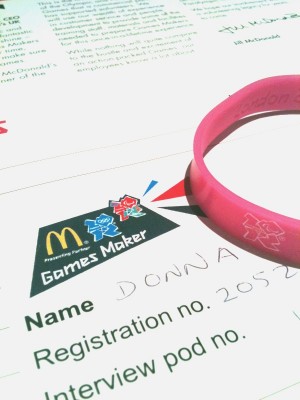 If you were a blog subscriber last year, you might remember my entry about the process – it was the most popular post I’ve ever written in terms of hits, with tens of thousands of hits logged before I took it down from my website.  In mid-2011, before the final selection of Gamesmakers, social media (blogging, twitter and Facebook) rules were released, and to be on the safe side and to avoid knocking myself out of contention, I removed the post.  The rules in place also meant that I was not allowed to share some of the high points from the volunteering I did at the triathlon test event – the London World Championship Series race at Hyde Park in July – or the cycling test event – the Surrey Classic road race in August.  But I was allowed to share my photos from spectating the Men’s elite event – and with the new rules issues in the autumn, I can also now write (and tweet, and post Facebook status updates) about my experiences. *happy writer smile*

On Sunday I headed to my first Games Maker training event, at Wembley Arena.  Over 4,000 people braved the snow and bad weather to attend yesterday’s event – one of a series of half day orientation kick off events. 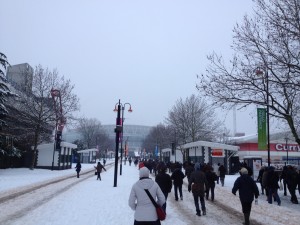 When I got home yesterday afternoon, DH (my husband’s initials – no I do not use this to mean “darling husband” which, although true, I would never use to abbreviate his name this way online!) asked me what the event was like.

In short: it was a multi-media heavy orientation to the sheer size of the task ahead.  Through a combo of videos – including the awesome film that was behind the successful London 2012 bid – interviews, and “television” transmissions depicting a day in the life of a Games Maker, we were able to get a sense of the amazing month in store for both London and the world, and for us as volunteers at the 2012 Olympics and Paralympics. 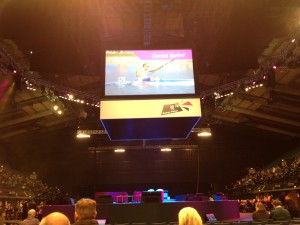 It is a huge thing.  To give you some figures, the Games will have:
– 200,000 Games Makers
– 1.75 million meals served at the four McDonalds concessions inside the Olympic Zone
– The single largest peacetime catering effort ever in British history

The day was hosted by Jonathan Edwards, British Olympic gold medal champion and presenter extraordinaire.  He kicked off the day recounting his drive to London, and passing a big sign of Mo Farrah with the following tagline:

Of course, he used this to refer to the training at hand – to be a Games Maker.  But I couldn’t help but think of the words in terms of my own 2012 triathlon ambitions…

The interview that stuck with me – above all others – was with Paul Deighton, CEO of the Local Organising Committee of the Olympic Games.  The following words really resonated with me:

“The power to inspire can be a huge catalyst for change.”

Wow.  Those words. They just clicked with me. They embody everything I believe, all that I have learned, and what I try to live when it comes to leadership.

And here’s a little known fact about me: I have a minor in leadership studies from The University of Maryland where I studied with Georgia Sorenson, one of the leading leadership academics in the world.  Yes, I get all fired up when it comes to hearing powerful words from leadership, and moreso when those words are a call to personal action.  I loved hearing Paul Deighton speak.

I can’t wait to be a part of the London 2012 Olympics – they say that it is a once in 80 years type of experience for a Londoner.  But forget limiting the experience to Londoners – volunteering is an extraordinary opportunity to be a part of something that unites people globally.

It’s not on my 2012 schedule posted on this site – but it is a huge part of my summer plans.  And thanks to the new rules about social media from the organisers, I’m glad I can publicly write about this part of my life.

One response to “Becoming a Games Maker: the road to volunteering for the London 2012 Olympics”