A few months ago I had enough. I was tired of reading about how cupcakes were evil.  Really? You are calling a *cupcake* EVIL?

Poor cupcake.  What did you do to be called evil? It seems, so, well, wrong to call you that…

Why are we assigning such a label to a CUPCAKE?? An inanimate object! A thing! It doesn’t cause harm, and equating a baked good with morality?

OK, maybe my reaction is a little over the top…

I have the benefit of having a fantastic mother in law who amongst other things is a psychologist.  To sense check my sanity in my over the top reaction to calling a cupcake evil, I asked her what she thought…

“I can’t think of anyone professionally who would refer to food as evil. You might say that about the way food is collected, or the way supermarkets behave, or the starving world as bordering on the evil. But not about a cupcake.  If people refer to food as “evil” it is making light of one of the most detrimental words you can use about anything – in other words misplaced language.  Sometimes jokingly people speak of eating something yummy and nutritionally negligible as “Sinful” – but sinful does not add up to evil. Nor does eating chocolate. 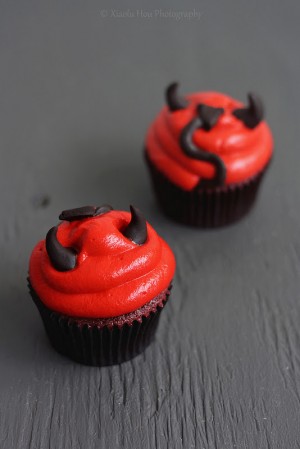 “Poor cupcake they might as well decorate you with horns and a black tail.

“What interests me the most is the use of language, and how “evil” seems to become a diminutive of what it really means.  After all, we would have great problems in referring to a person as “evil”.  Hitler might fit the category.  So are we philosophically saying that there is a connection between Hitler and the cupcake?”

Yes. That is it. It is the misuse of language that bothers me. It is equating a cupcake with Hitler.  And before you say “well you are just reading too much into it and overreacting” I admit it, I probably am. But I really do believe that the words we use reflect who we are.

Anyway, onto other cupcake thoughts.

Cupcakes Are The Same As Crack

In November, Bloomberg released an article target=“_blank”. Nothing new there – I mean they *are* a news organisation, they release news articles all the time, right?!  But the first sentence grabbed attention.

The article then goes on to detail how in 2011 alone, 28 studies and papers were published on the subject of food addiction.  These studies have detailed and how the combination of sugar and fat has produced addictive behaviour in lab rats.  And how brain scans of obese people and compulsive eaters reveal disturbed brain reward circuitry similar to that of drug abusers.

Even the US government has joined in!  The TSA detained a cupcake, deeming it dangerous material unsuitable as a hand carry item.

I contend, and always have done, that there is nothing wrong with sweets and treats – in moderation.  When we eat, we make choices.  It seems science may be telling us that our choices may be leading to addictions. But at the end of the day WE are the ones responsible for putting what we eat into our bodies.

And because I think this way, it just seems so unfair to say “Cupcakes are evil – I don’t eat them because they are evil” when the reality is when you call something evil it is masking the CHOICE you are making to NOT eat a cupcake.  And when you mask your choice with the word EVIL, chances are you are not making your choice based on the MORAL GROUNDS that the word EVIL implies, but probably on nutritional ones.

I dug a little deeper into the TSA story.  I mean, I have carried cake onto an airplane in the US before.  I just didn’t understand what in the world could possibly be wrong with a cupcake…  So I followed the Washington Post link to the TSA blog.  Yes, the TSA blogged about cupcakegate.

Turns out, the TSA wasn’t objecting to the cupcake… The detention of the poor cupcake was about the ICING. You see, icing is considered a gel, and the “evil cupcake” had a thick layer of icing, violating the maximum amount of gel permissable in a hand carry item.

Why did it have a thick layer of icing?  Because the cupcake WAS IN A JAR. 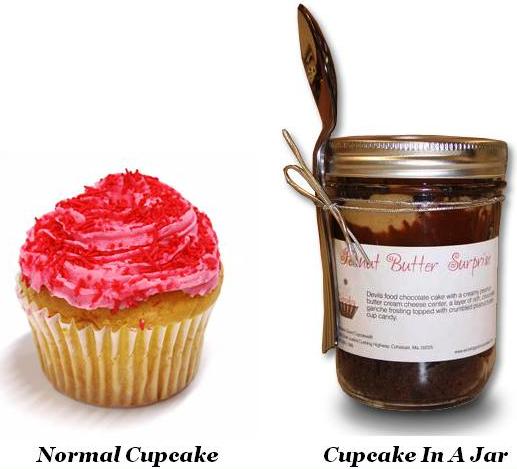 Oh my god.  Are you serious? A cupcake in a jar?

Turns out I must have been living under a rock.  Or doing too much home baking.  Because even in London, cupcakes in a jar have hit the trend headlines as far back as October 2010 with an appearance on Daily Candy.

A selling point? “Two not-so-guilt-free layers of icing!”  Oh yeah, and don’t forget it keeps for five weeks in the fridge, can be send to friends in the mail, is so soft and moist.

But… TWO LAYERS OF ICING!!

Think about it.  You may be thinking “yeah icing – I love me some frosting.”  But honestly, do you know what goes into frosting? And would you want equal parts frosting and cake if you did?

I was reading one of the food blogs I read, and Mara referred to her favourite frosting recipe ever. I’m a cream cheese frosting type of girl, but the post got me thinking. This frosting was probably close to what was being used in the cupcake-in-a-jar, that TSA violating quantity of “goodness”…

About half a cup of flour, a cup of milk, a cup of sugar, a cup of butter, and some vanilla.  Buttercream meets milk based thickening…  I input it into fitday.com to see how “evil” this stuff was.

I reckon a batch that size probably is suitably for a dozen generously frosted cupcakes.  But a cupcake in a jar, with double the amount of frosting of a normal cupcake?  Maybe that would be about 20% of the batch?  So a whopping 550 calories from frosting alone.

(Go ahead, start to lecture me on butter.  I eat real butter. I am not anti-butter.)

Don’t get me wrong – I like cupcakes.  But I just think IT IS SO UNNECESSARY to overdose on frosting.  I DETEST cupcake bakers who chop the nicely rounded tops off their cupcakes to get an even surface for frosting (and as a consequence you get more frosting as they round the top – with frosting).  I like a nice even layer of frosting and a higher cake to frosting ratio…

We make the choices.  We eat the cupcakes.  It is not a cupcake’s fault.

We just need to be aware.  And make educated choices.  If you are going to have a treat, do you really want your treat to have zero nutritional value while giving you an entire day’s worth of calorie requirements?

(Ok I know it is not about calories, but I’m making a point. And yes, the frosting is high in Vitamins A and D, but really, it is just not the thing to rely on for vitamins! Think fruit and vegetables, not frosting. Frankly I think treats should not be considered as a source of nutritional value!)

Be smart.  Choose well.  And also… THINK PORTIONS.  I mean, a whole jar of cupcake? Do you need a whole jar?

Me?  I have treats about 20% of the time.  That means dessert is a treat when I’m going out to dinner, about once a week maybe.  Sometimes I also indulge on the weekend, when I’ve had a relaxing meal at home and I’ve baked something yummy like carrot cupcakes.

(And by the way, I am not counting my wine intake in my treat consumption approximation. It’s my blog, I’m excluding that!)

Back To The “Evil” Thing

Poor cupcake.  It’s not its fault that it is so damn tasty.  I know, that combo of fat and sugar is turning on some addiction centre in our brains.  But please don’t blame the cupcake.

Source: Johnny Cupcakes – I’m dying for one of these t-shirts.

Please don’t call the cupcake evil – it’s just not the right word.  Cupcakes are not Hitler.

Evil labels are an easy way out.  I think at the root, when we use language like that, we absolve ourselves from making choices.

I mean, what’s the big deal.  A cupcake is a treat with limited nutritional value that TASTES GOOD.  And, eating one?  It’s always YOUR CHOICE.

It IS NOT the cupcake’s fault.

Author’s note: Oh, someone did use a cupcake to illustrate Hitler. There is a cupcake hitler on YouTube. But I’m not linking to that!

3 responses to “It’s Not The Cupcake’s Fault”