When I first started to blog, I used to schedule my posts – themes per days of the week.  So Monday was training, Tuesday tips, Wednesday all things charity, Thursday my random thoughts, and Friday food.  In 2010 when I upgraded and launched this website (when I became Beating Limitations, rather than My Fitness Year), I decided to ditch the themed days for posting.  I found it a bit restrictive and didn’t feel free to write what I wanted, when I wanted.  In a lot of ways the switch to free flow blogging without a schedule unleashed my creativity.  And in other ways, I found that I was posting less and less about food – less recipes, less about how I actually eat (I always find it surprising that people are interested in what I eat, but there you go).

Since the autumn, I’ve made an effort to post more about food.  Maybe that is because I reduced my training volumes a lot – it was the end of triathlon season, I was coping with fatigue from a crazy 2011, and I was managing peroneal tendonitis.  I was less inclined to write about training and triathlon because I wasn’t doing as much as I normally do. In the “downtime” I’ve also been thinking about ways and things that would motivate me to write about food more often, and things to do that would tap into my inner foodie and home cook.

At the end of 2011 I contacted a few of my online and real world friends (Nadya, Leah, Erica, and Paul-Baptiste) and put the idea out there about building a shared site where we would be able to post our recipes.  You see, we all love creating things with our ovens – Nadya and Leah are ace with cakes, Paul-Baptiste is amazing with breads and tarts, and Erica is an all around inspiring cook from a family of bakers.  I suspected that, like me, they might not have the time to create and post weekly their oven-based creations.  Turns out they were all as interested in contributing to a shared space where we would be able to post our kitchen experiments.

So with the start of 2012, we have launched a website to document our baking.  52 Weeks of Baking is still in its infancy (if you are skilled with WordPress, let me know – hint hint!).  And today is the day of our first post.

We will be building our content up throughout the year, with our goal to have a post a week, on each Friday so that people can feel free over the weekend to try out what they see on the site.  I will also be cross posting my own contributions on both 52 Weeks of Baking as well as here on Beating Limitations.

I’m really looking forward to using the #52bakes project as an excuse to try out some of the fantastic cookbooks lurking on my shelves, and to indulge in some weekend treats.  So, without further ado, I bring you today’s Friday Food recipe, as posted on 52 Weeks of Baking… 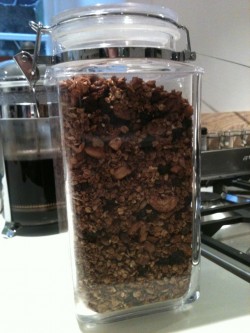 1.  Heat oven to 375F (180C).
2.  Mix together all of the dried ingredients (EXCEPT the dried fruit of your choice) in a large bowl.
3.  Heat the honey, maple syrup, and olive oil together in a saucepan, and whisk until smooth and combined.
4.  Pour over the dried ingredients and mix until well coated.
5.  If you prefer a crispy granola, whisk one egg white until frothy, and stir into the oat mix until well coated. If you prefer larger clumps, I would use two egg whites. Otherwise this step can be skipped.
6.  Spread the mixture evenly into a large shallow baking dish.
7.  Place in oven, and stir the mixture approximately every 5 or 10 minutes until it is golden in colour. 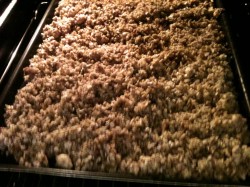 8.  Once golden, remove from oven and stir the dried fruit (raisins) into the mix.
9.  Leave pan to cool.
10. Once cool, store in an airtight container.

I ate this granola with greek yoghurt. I suspect that it could also be served as a cold cereal with milk, as a topping on other desserts such as ice cream, or as the stuffing for a cored baked apple.  However you eat it, enjoy!

One response to “Friday Food Posts, A New Project, and Homemade Granola”