My blog has been quiet.  I headed off to Asia on the 16th of October, and silence reigned for a while.  This trip hit me rather hard.  Normally I go away on business for whirlwind trips – a long haul flight, a day or two of meetings, then a long haul flight back.  But this time I was gone for 10 days.  10 days in Asia – Japan and Korea.  Time to adjust to the time zone.  To explore the countries a bit.  And to relax into a rhythm which I hoped would include some good training time.

Fully adjusting into a time zone is hard.  I spent almost all of my 10 day trip tired.  Feeling exhausted.  Coupled with the 10k tough run I did on the Saturday before I left, and the general fatigue and soreness in my legs that just didn’t vanish, and this trip I just couldn’t muster up enough motivation to train through the travel.

I learned that sometimes you just have to waive the white flag and surrender.  I knew that sleep was far more important than miles on sore legs.

I managed to get a treadmill run and a 12km run done while in Tokyo.  And then the following week, in Korea, training didn’t happen.  Nor did it happen again until Saturday’s swim session.  And that swim?  It was tough.  Readjusting to a time zone after fully adjusting to the other time zone?  Well, that is energy sapping too.

I was able to get my “long run” done in Tokyo at the Imperial Palace. 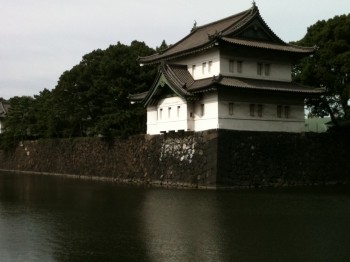 Little did I know that around the Imperial Palace is a closed circuit (no traffic lights, well lit, paved) 5 kilometre path.  Perfect for laps and a long run!

Clearly every runner in Tokyo runs this palace loop.  The place was PACKED!  It was like a small race day.  Hundreds of runners out doing their thing.  Fast runners.  Runners wearing marathon shirts for a November 2011 event.  Tri club runners wearing tri club kit.  Slow runners (like me).  Runners everywhere!

I turned into the grounds and settled in for the run.  I knew I had 12km on my plan, and that was my aim.  Also in the back of my mind I entertained thoughts of stopping at 10km.  But I decided to push those aside and go for the full 12km even though I was tired.

Before I set off I asked my hotel concierge a few basic questions – of course the best way to get there via the Tokyo metro, but also how exactly I should run around the Palace.

I am SO GLAD I asked the concierge for advice.  She warned me that as the Palace was on a hill, that I would probably be better off running counterclockwise.  That way I would do a longer gradual climb to the top of the hill, and then a steeper decline over a shorter distance.  This is the direction that probably 95% of runners did.  It was great to be able to take it easy on the downhill.

I found someone at my pace and had a chance to run and chat in Japanese.  My Japanese is REALLY RUSTY.  But we still talked a bit about how long we had been running (both of us new runners) and how far we would run today.  Lots of smiles and a “GANBATTE” (Good Luck) and I actually wound up leaving my new friend behind on the path.

This was also my first run ever with music.  Having watched The Voice and love Dia Frampton on the show, I had a Meg & Dia album that was mellow, and a nice background to the tranquil grounds.  Now, to find better headphones!

And although I forgot my Hammer Endurolytes at home, I did find (tucked away deep in my travel bag) my emergency sample pack of Zero electrolyte fizzy tablets to mix with water and drink.  I have learned that I feel SO MUCH BETTER if I take electrolytes each hour of training I do.  I sweat a lot and this extra supplementation keeps me feeling balanced and headache free post runs.  The Zero tablet was an adequate, although not perfect, substitute for Endurolytes.  Lesson learned – keep a secret stock of emergency gels and electrolytes in the travel kit for times like these.

This was not my best run ever.  My hip flexors were tight, hamstrings tight, ankles tight.  The hills felt tough.  I thought to myself repeatedly “You know, you can just stop at 10km and it’s okay.”  I didn’t like hearing that voice inside of my head talking me out of my goal.

But I learned that I can push the negative voice aside when I just focus on the task at hand – running, keeping decent running form (or trying to keep it as I’m not sure I did!), breathing and relaxing into things.  I learned that when I focus on what I am doing exactly in that moment leaving all else behind – that I can do more than I think. 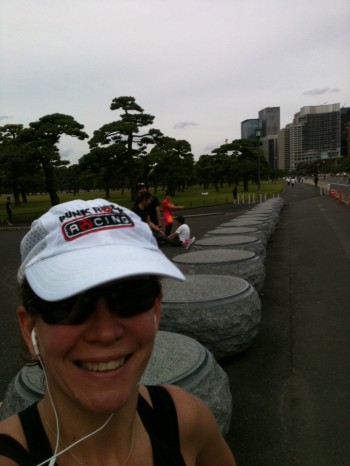 On my way back to my hotel, picked up some onion rings.  And a coca cola.  A little post run indulgence, coupled with a banana, lots of water, and a (probably not too healthy) sandwich.  I had a long bath, some green tea, rested a bit, and then met a friend from grad school that evening for dinner.  My legs felt okay, good enough in fact to get a bit of window shopping done in Ginza – what incredible shopping!

All in all, this was a great way to spend a Sunday while on the road for work.

I did this run as a participant in the The Sisterhood of the Shrinking Jeans Run the ‘Hood virtual race (I did the 10km option).  I loved the fact that all around the world, people would be doing their own run.  Of course, I was the slowest in my age group, but that is nothing new.  What was important was getting out and getting my run done.

One response to “Tokyo and a 12km Run”