On Saturday DH and I did the Egg Hunt Triathlon in CB Smith Park, Pembroke Pines Florida.  On a whim we signed up for the tri – a sprint distance – as something fun to do while on holiday in Florida.

“As something fun to do…”

I have to admit, when the alarm went off at 4.30 am on Saturday I was wondering what kind of insane fool I have become.  Who wakes up at 4.30 am on holiday to do a triathlon?  Well, we did.  Because it seemed like something fun to do.

We hadn’t thought too much about this triathlon.  In all honesty I was worried about the way I would feel, after doing the MS150 less than a week before.  I was still, well, a bit sore down under…  We stuffed our things into backpacks for transition, and headed onto the highway at o’dark o’clock.  We were so tired we did not even change the radio station, spending our time listening to 80s classics on the drive.  Lisa Lisa is not really ideal pre-race music! 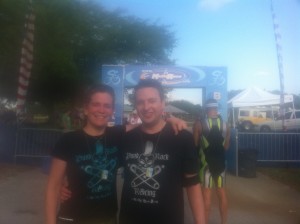 When we arrived it was all a bit of a rush.  Find the racks.  Throw the bikes on.  Find a bathroom.  Queue for ages.  Rush to the water’s edge.  Gun goes off.  Boom.  First triathlon underway.

I hung back on the swim, and I knew I would not be fast – I haven’t been working on my swim, let alone race pace or speed. But you know what? I didn’t care.  Because this triathlon was supposed to be for fun, just to see how things feel, to get used to showing up and racing relaxed and happy.

I got out of the water and ran to transition (once I managed to get off of the rocky shards which really hurt my feet!).  Yes.  I ran to transition.  I have never run between the swim and bike.  But you know what?  I felt good.  And it was fun to run to the bike – I could not wait to get on the bike to see what I could do.

I decided to do two new things on the bike.  First – to ride without socks.  This was my first triathlon with my new shoe/pedal combo so I was a bit curious how this would feel.  And the verdict?  Wonderful!  Totally comfortable.  Of course, I have not practiced putting my shoes on while riding or taking them off and leaving them on the pedals.  But that was fine by me – the important thing is that I felt comfortable and happy with the set up.  The second new thing? Racing with a different saddle.  I am lucky enough to have borrowed a saddle from Tamsin Lewis, a pro triathlete, and I was curious how riding on an ISM saddle would feel during a race.  I was curious how riding would feel in general, as I was still feeling the after effects from the MS150.

The bike felt good – my legs, the saddle, my stamina and fitness.  I didn’t red line it on the bike.  I tried to keep an average speed of about 28kph.  I would have preferred 30kph but I haven’t mastered eating and drinking on the bike.  People whizzed past me – there were a lot of sweet aero time trial bikes on the course, I guess because Florida is pretty flat.  But I just kept going, enjoying every moment on the bike.  And I felt strong.  This was my strongest triathlon bike yet.  And… When I got off the bike I felt like I had strength left in my legs.

I struggled a bit in transition between bike and run – I wear compression socks on the run, because they work best with my ankle foot orthotics.  But they are a pain to put on.  I need to figure this one out.  This triathlon I wore Moose UK compression socks – because my Sugoi’s were dirty from running earlier in the week.  I was really happy with the Moose.  They have a bit of extra cushioning exactly where I am getting irritation from my ankle brace.  And although I wore one size too big, I’m thinking of getting another pair in the right size and training with them for a while.  The fact they did not lead me to re-blister is a good sign – and may be the final deciding factor in my choice of socks for the season.

After what seemed like an eternity battling with socks and putting on my braces, I headed out for the run.  I felt good.  At some stages I actually felt like I was running, not just plodding along and battling my nerves to get my muscles to move.  I was enjoying it!  I have not really run much since January.  Between my chest infection for the first 8 weeks of the year, and my focus on the bike, running has been an afterthought for me.  But it felt good!  The PT I have been doing has made me more aware of pushing from my glutes when striding, of feeling the push through my calves.  I focused on this, and breathing.  I think I had my quickest ever 5k run, a little over 13 minute miles.  I never focus on my pace, as just getting out and doing what I can is an accomplishment for me when it comes to running, but this is a nice little stat for me to see as it shows that the biking and PT are paying dividends. 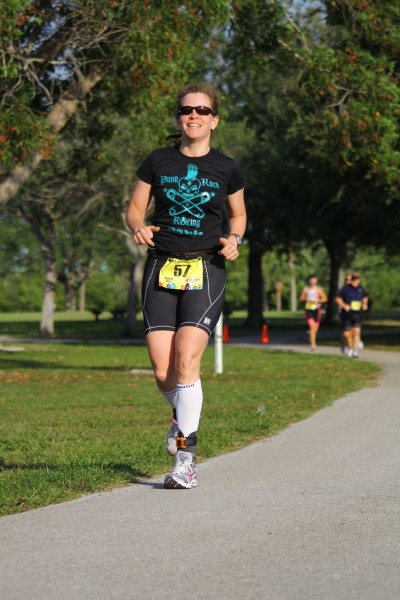 When I finished the triathlon I felt great.  Functioning.  Not too tired.  Happy.  And hungry.  We headed off to get breakfast and relax for the rest of the day.  And I reflected a bit as I sat by the pool.

Wow.  Two years ago I was struggling with running, having a hard time even managing 30 seconds of continuous running.  My knees were unstable, I was not sure I would ever be able to string together 5k.  I worried about my ability to do a sprint triathlon and being able to function after due to exhaustion…  Now?  I can show up and just do a sprint triathlon for fun.  My transformation has been huge.  I started this race with confidence – rather than being afraid of each individual component of the tri, and worrying about my performance in each part and fretting about goals and putting pressure on myself at each stage, I just showed up, jumped in and had fun.  It was enlightening.  The Egg Hunt Triathlon was testament that with patience and commitment the impossible can become normal.  It was validation that even for people with challenges sport can become a source of pleasure – not pain.  It was the moment the penny dropped.

I think Saturday was the moment that I finally became a triathlete.